Reader, I keep promising myself to get back to blogging regularly, and yet here we are again and it’s been ages. I’m not going to check how long as it will just send me off on a tangent that, in turn, won’t get a blog written.

So to bring you up to speed, I’ve been a bit busy.

August saw the big count down to the long, long, long awaited trip to the UK. Since 2005 I’ve been trying to write “Castle Quest” and could never really get it finished as it was set in Scotland. So what you say? Well, I’d never been to Scotland, so how could I write about it realistically? In short, I couldn’t. I had several attempts at saving, and each time was unsuccessful for a variety of reasons, but this year was different.

You may remember reader that I attended a weekend writing course with Kate Forsyth last year in Sydney? Well here’s the link to Kate and the Australian Writer’s Centre. At the course, called History, Mystery and Magic, we had a wonderful time, but Kate told us of a course she was going to be running in the following September in the Cotswolds, England. How lovely, I thought.

The Lygon Arms, Broadway, The Cotswolds

Well somehow, Kate convinced my darling husband that I should go, so I booked in and paid a deposit and then I panicked! I had a lot of money to save and I’d committed to going to the other side of the globe on my own! ON MY OWN.

Thankfully, Dave decided to meet me for the second half of my trip and so we went to Scotland together. It was the honeymoon we’d never had, well sort of. For me it was a research trip with my own personal chauffeur and sounding board. 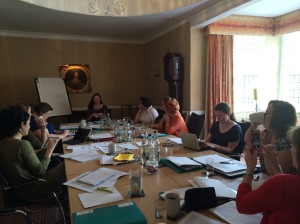 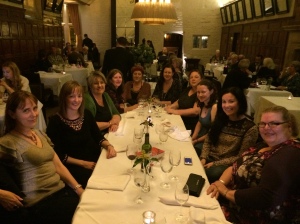 The highlight of my trip was . . . well the whole thing actually, but as far as my writing was concerned it was visiting the setting of my story, Castle Sinclair Girnigoe, near Wick in Caithness Scotland.